This year, Wall to Wall Studios produced a series of TV advertisements for Hawaii Energy. Hawaii Energy is an energy efficient program in the state of Hawaii. The company aims to educate the people of Hawaii about clean energy methods in order to reduce consumption and save money (as well as the environment).  Wall to Wall Studios and Hawaii Energy have been in collaboration for several years, as Wall to Wall helps with the main branding aspects of the company. This includes website design, logo, print media and television/online advertisements. 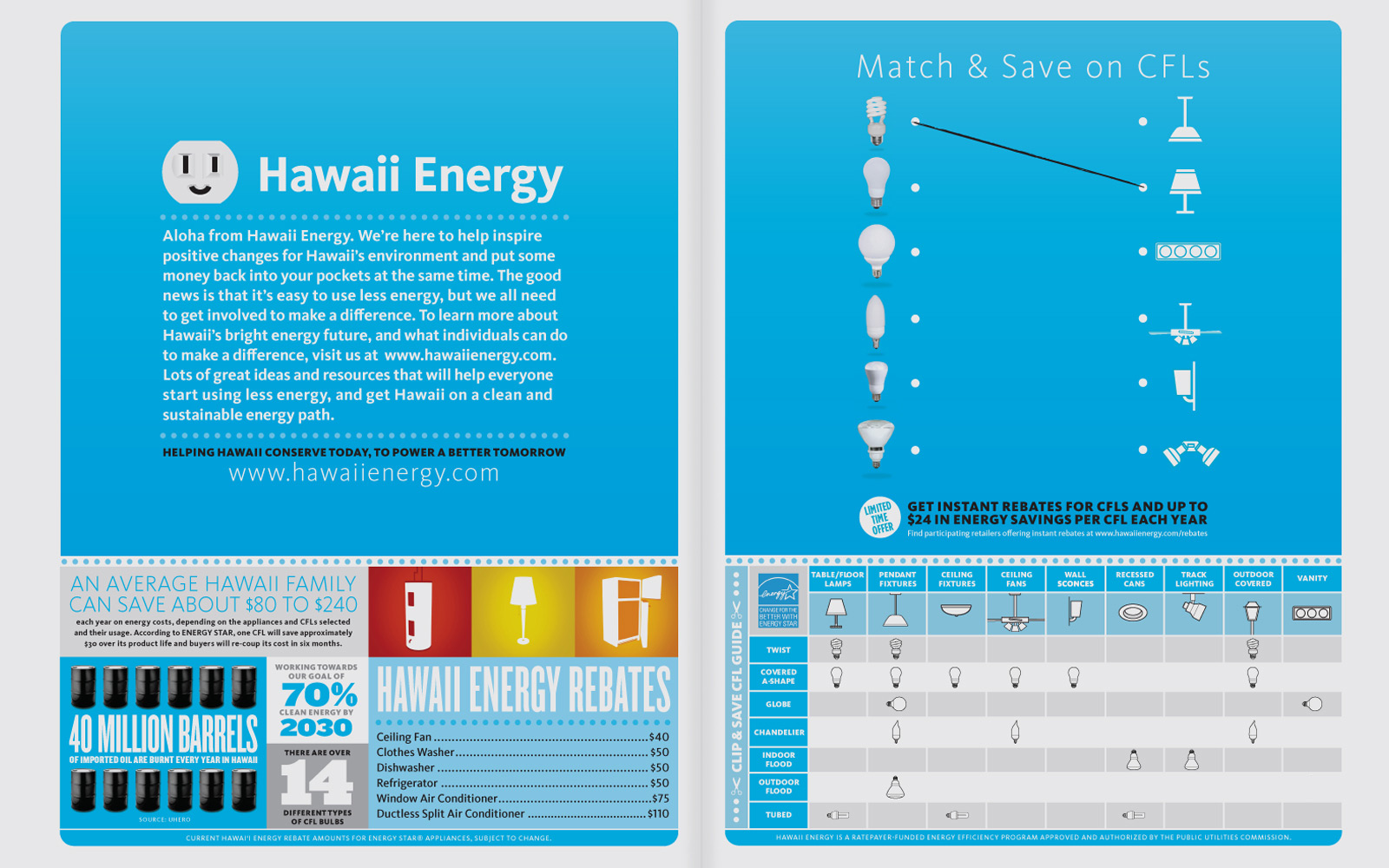 In previous awareness campaigns, Wall to Wall used scientific/technical evidence to emphasize the importance of conservative energy methods. This was done by using more serious television advertisements and displaying statistical graphics on the Hawaii Energy website. By alerting citizens about Hawaii’s extreme dependence on oil/petroleum imports and emphasizing clean energy and ecological importance, the advertisements cause viewers to be more conscious about their energy choices. However, Wall to Wall’s most recent advertisements steer away from serious messages and add a fun twist to typical awareness campaigns.

Created in 2017, this campaign features many short promotional videos, most with a duration of around 16 seconds. All of these clips feature animated outlets in some way, a nod to the company logo. In this clever approach, Wall to Wall studios considered what it means to save energy and determined the best possible way to illustrate that, without actually using words. This is essential in branding, and this is what Wall to Wall Studios is paid to do. The final product features a normal outlet in which each receptacle has three holes, but the holes are animated into a face for each socket. The faces on the outlet are able to produce a variety of emotions ranging from happiness to anger. This is apparent in the promotional segments which often include the electrical faces becoming upset and exhausted when somebody leaves without unplugging their devices. The logo for Hawaii Energy features one of the outlet faces smiling, probably at the idea of clean energy that the company so passionately encourages.  These personified outlets allow energy users to see that wasting energy is harmful in a literal sense: their outlets are very angry. But it also illustrates a bigger idea that not conserving energy can be damaging to the environment.

These advertisements appeal to viewers by using a combination of creative executions, mainly humor, animation and personality symbols. Having already used a statistical approach, Wall to Wall’s new advertisements aim to be effective in different ways. By conveying the main goals of Hawaii Energy in a lighter manner with an animated personality symbol, viewers might be more attentive to the message. Because television is basically intrusive, many individuals in Hawaii will be exposed to the promotional videos. By capturing their attention right off the bat with an animated character, consumers will be less likely to zip or zap away from the commercial and actually encode the message.

By being knowledgeable in these areas of advertising and promotion, Wall to Wall Studio’s is able to create innovative and successful branding for their clients. As a result, every effective project for a client has a positive impact on Wall to Wall Studio’s as a branding agency because it demonstrates their ability to communicate and sell messages to consumers.

View all posts by Xiola Jensen